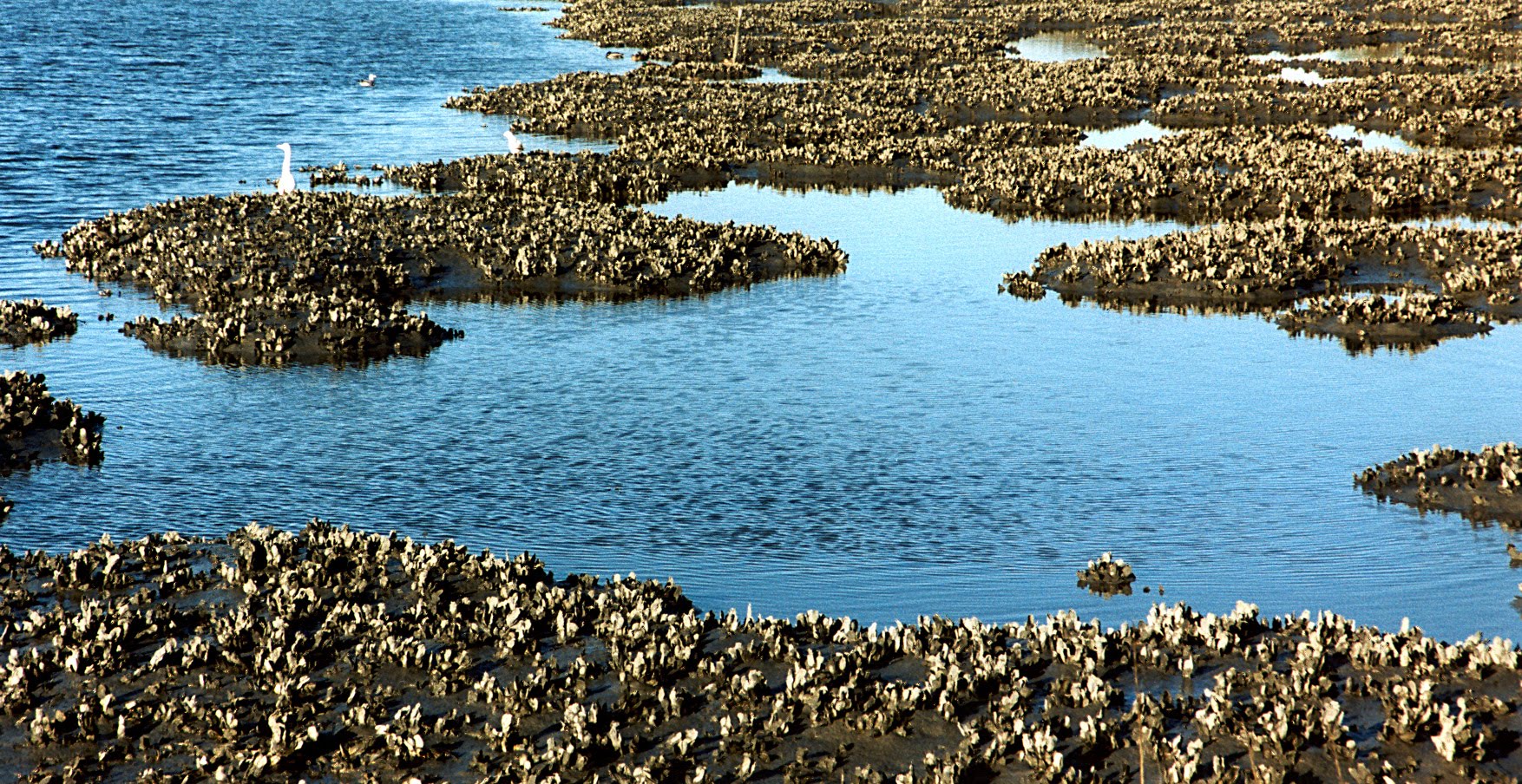 Shell bottom is unique because it is the only coastal fish habitat that is also a fishery species (oysters). Shell bottom is estuarine intertidal or subtidal bottom composed of surface shell concentrations of living or dead oysters, hard clams, and other shellfish. Oysters, the primary shell-building orngaism in North Carolina estuaries, are found throughout the coast, from southeast Albemarle Sound to the South Carolina border. The protection and restoration of living oyster beds is critical to the restoration of numerous fishery species, as well as to the proper functioning and protection of surrounding coastal fish habitats. historically ,restoration was managed for osyter fishery enhancement. Current efforts mix fishery and ecosystem enhancement with sanctuary development.

Restored and protected oyster reefs provide up to $40,200 per acre per year

Shell bottom is widely recognized as essential fish habitat (EFH) for oysters  and other reef-forming mollusks and provides critical fish habitat for ecologically and economically important finfish, mollusks, and crustaceans. In North Carolina, over 40 species of fish and crustaceans have been documented to use natural and restored oysters reefs, including American eel, Atlantic croaker, Atlantic menhaden, black sea bass, sheepshead, spotted seatrout, red drum, and southern flounder. Oysters are ecosystem engineers that alter current and flows, protect shorelines, and trap and stabilize large quantities of suspended solids, reducing turbidity by building high relief structures. The interstitial spaces between and within the shell matrix of oyster reefs are critical refuges for the survival of recruiting oysters and other small, slow-moving macrofauna, such as worms, crabs and clams. Shell bottom is also valuable nursery habitat for juveniles of commercially and recreationally important finfish, such as black sea bass, sheepshead, gag grouper, and snappers. Additionally, shell bottom is important foraging ground for many economically and ecologically important species. The proximity and connectvitiy of oyster beds enhances the fish utilization of nearby habitats, especially SAV. Shell bottom contributes primary production indirectly from plants on and around it, but it is more important for its high secondary productivity contribution from the biomass of oysters and other macroinvertebrates living among the shell structure. this in turn supports a high density of mobile finfish and invertebrates, which was found to be more than two times greater than in marshes, soft bottom and SAV.

Oyster  populations  in  North  Carolina  have  declined  by  as  much  as  90% from  historic  levels, but populations are increasing

Oyster  populations  in  North  Carolina  have  declined  by  as  much  as  90%  from  historic  levels due to poor harvesting practices. After  1991,  oyster  stocks  and  harvests began  to  collapse  from  disease  mortalities  and  low  spawning  stock  biomass.  Harvests began  to  rise  again  around  2002,  and  the  trend  has  continued.  Between  2000  and  2013, oyster dredging trips and hand harvest trips have risen substantially, with increasing larval availability,
connectivity,  and  recruitment  potential  for  restored  and  existing  reefs.  As  of  January  2015, there were 13 established oyster sanctuaries, with an additional two proposed.