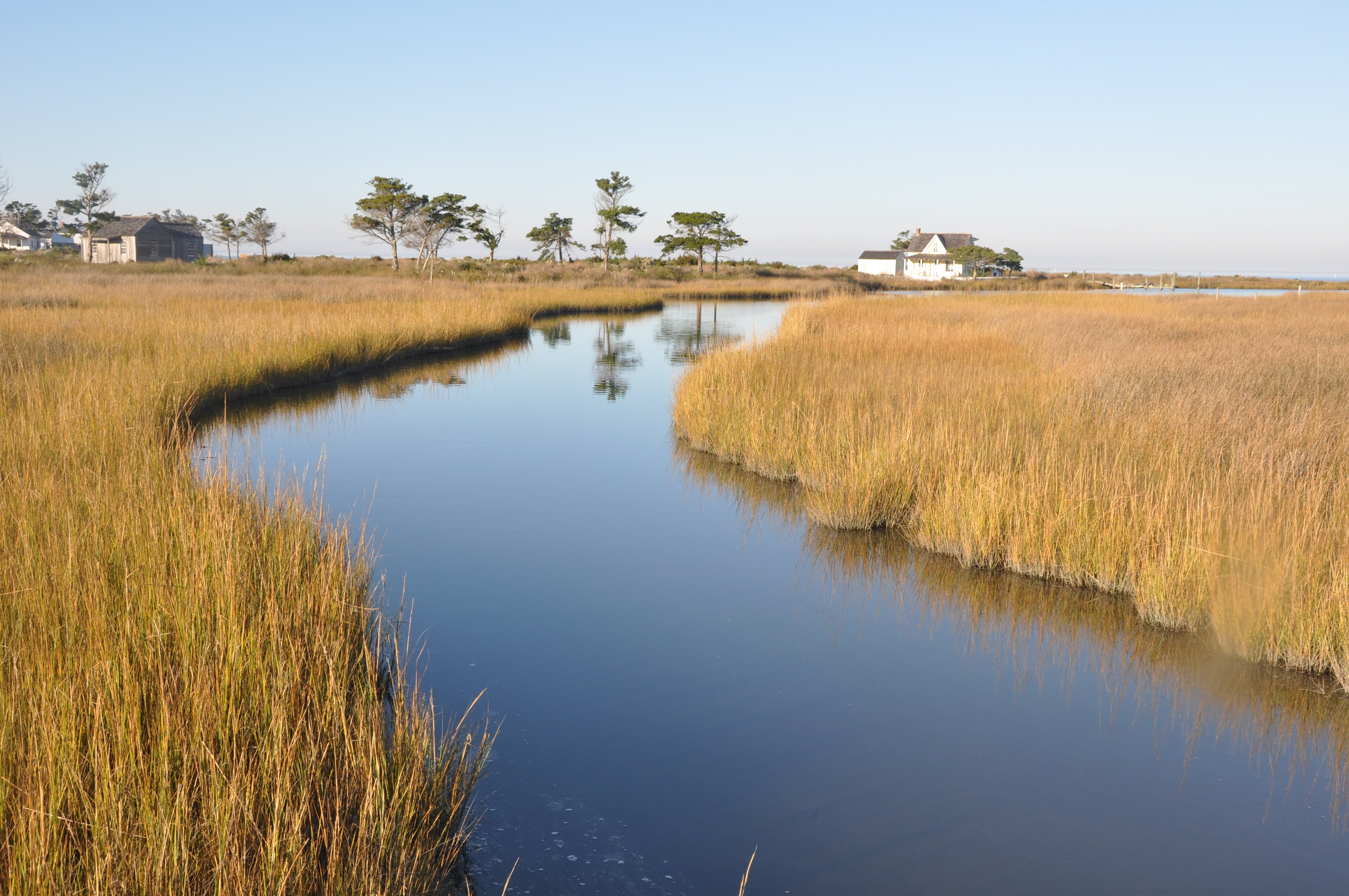 Wetlands are critical spaces for fish nursery and foraging, and for reducing flood damage due to hurricanes and climate change

Wetlands are essential breeding, rearing, and feeding grounds for many  species  of  fish  and  wildlife.  They  provide  critical  ecosystem services that contribute to healthy ecosystems and fisheries habitat. Coastal wetlands cover 40 million acres in the continental  United  States,  with  81%  in  the  southeast. Wetlands require  the  presence  of water at or near the surface and vegetation adapted to wet soils. Wetlands occupy low areas, often marking the transition between uplands and submerged bot- tom,  in  areas  subject  to  regular  or  occasional flooding by lunar or wind tides. Wetlands are vegetated with marsh  plants  such  as  cordgrass and  black needle rush, or forested wetland species like sweet gum, cypress, and willows

Services  provided  by  wetlands  include  improving  the  quality  of habitats  through  water  control  and  filtration; protecting  upland habitats  from  erosion;  providing abundant  food  and  cover  for finfish, shellfish, and other wildlife; and contributing to the economy.    By  storing,  spreading,  and  slowly  releasing  waters,  wet- lands  are linked  to  reduced  risk  of  flooding;  wetland  loss  has been  linked  to  increased  hurricane  flood  damage. Wetland communities are among the most productive ecosystems in the world. The plant matter decays into detritus, where it is export- ed to other waters and provides food for numerous organisms. Additionally,  wetlands provide  food,  ideal growing  conditions, and predator refuge for larval, juvenile and small organisms.

Nearly all commercial finfish and shellfish depend on wetlands, and even small marshes can reduce wave energy by up to 95%

It  is  estimated  that  over 95% of the finfish and shellfish species commercially harvested in the United States, and over 90% in North Carolina, are wetland-dependent. Consequently, wetlands significantly contribute to the productivity of North Carolina’s seafood and fishing industries.

The economic benefit of wetlands in providing flood control, stabilizing shorelines, and trapping and  filtering pollutants  has been  extensively studied.  By  providing flood  control  and reducing shoreline  erosion,  wetlands protect  coastal property. Wetlands also protect property by deterring shoreline erosion. Studies have shown that even narrow (7-25m) marsh borders reduce wave energy by 60-95%. These services explain why wetland habitat has been linked to reducing hurricane damage. One study estimated that the loss of 1 acre of coastal wetlands could result in a  $13,360  loss  in  gross  domestic  product ($14,759  in  2014  dollars), and that U.S. coastal wetlands could provide as much as $23.2 billion/ year (25.63 billion/year in 2014 dollars) in storm protection services.

Throughout the 1800's and 1900's, large amounts of wetlands were lost to ditching and draining for agriculture. More recently, wetland loss is due to development, dredging for navigation channels, and building seawalls and other hard structures

In the late 1800's and early 1900's, large amounts of wetland loss resulted from ditching and draining for agriculture and forestry. Over the years, wetland loss has occurred from dredging conversion to deep-water habitat for boat basins and navigation channels, followed by upland development, erosion, and shoreline hardening.

Wetland impacts are now regulated by numerous federal and state laws including the US River and Harbors Act, the  US  Clean  Water  Act,  the  NC  Coastal  Area  Management  Act  (CAMA),  and  the  NC  Dredge  and  Fill Law, among  others.  Wetland  filling  for  development  and  wetland  loss  due  to  erosion  and  rising  water levels  are currently the primary threats. Reduction of vegetated buffers can result in wetland loss and increased stormwater runoff. Legislative changes increasing thresholds for permitted impacts could contribute to additional freshwater wetland  loss.  Mitigation  is  required  for  larger  wetland impacts.  Offsetting  historic  wetland  loss may  now  be possible  through  opportunities  such  as  wetland restoration  on  conservation  lands,  creating marsh habitat  on  unused  dredge  disposal  sites,  and constructing living shorelines.